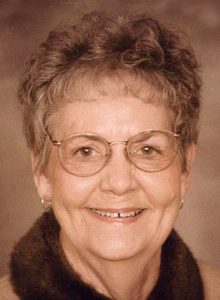 Evelyn Ruth Bentley Shults
Evelyn Ruth Bentley Shults, 91, of Ethridge, TN passed away on Thursday, April 21, 2022.
The proud daughter of Lloyd and Lottie Bentley, she was a graduate of Lawrence County High School. In August of 1955, she married Willie Ed Shults of Ethridge; the couple settled in Three Oaks where they raised three children. Her children’s number one fan, she never missed a ballgame, and they never doubted her unwavering love. After raising her children, Evelyn went to work for the Lawrence County Government for over 20 years before retiring in 1996. A lifelong volunteer, she was the treasurer of Trinity Baptist Church where she was a longtime member and active in the choir, and spent years delivering meals to her neighbors through Meals on Wheels. Throughout her life, Evelyn used colorful language to describe what she saw and how she was feeling; her family affectionately called them “MawMawisms.” And now you can hear her family say they’re just “flittin’ around” and random items are “dealy bobs” and “that beats all [they’ve]’ve ever seen” or something is “crazier than a runover dog,” and when they just want a small piece of dessert, they’ll ask for a “smell.”
She was most proud of the family she created: her three children, five grandchildren, and six great-grandchildren, all of whom are hoping they have inherited her genes so their skin will look like hers did all her life (twice a day Oil of Olay, the red jar) and all of whom will deeply miss her fried okra. She continuously loved and trusted the Lord and will sing forever in that big, beautiful choir she always wanted.
She was preceded in death by her beloved parents; her husband; and brother: Jim Bentley.
She is survived by her son: Keith Shults (Debra); and daughters: Kim Blackwood (Bobby) and Kelly Craig (Tom O’Brien); grandchildren: Erick Blackwood (Brittany), Amanda Donaldson (Max), Emily Jordan (Josh), Ashley Shults, and Grace O’Brien; and great-grandchildren: Hayden and Roman Blackwood, Charlie and Tommy Donaldson, and Luke and Jamison Jordan.
Funeral services for Evelyn Ruth Bentley Shults were conducted at Neal Funeral Home at 3:00 p.m. on Wednesday, April 27, 2022 with Michael Blackwood officiating. Interment followed at John Lay Cemetery in Ethridge, TN. The family suggests memorials be made to St. Jude Children’s Research Hospital. Neal Funeral Home was in charge of all arrangements. Condolences may be sent by way of: www.nealfuneralhome.net.