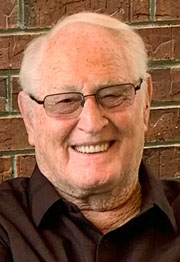 Kenneth Knott
Kenneth Knott, age 86, of Lawrenceburg, TN passed away Saturday, April 23, 2022 at Keestone Senior Community in Lawrenceburg, TN.
He was a native of Center, TN, retired Engineer from the City of Crossville, and a member of Loretto United Methodist Church. He was a past master of Mimosa Masonic Lodge #542, and member of the Kiwanis Club, and Lions Clubs. Mr. Knott was also a past lay leader at Coleman Memorial United Methodist Church.
He was preceded in death by his parents: Roy and Lucille Hood Knott; his wife: JoAnne Lindsey Knott; and one brother: Steve Knott.
He is survived by two daughters: Cathy Snowden (Tony) of Nolensville, TN, and Cindy Foster (Tony) of Spring Hill, TN; one son: Jim Knott (Lynn) of Brentwood, TN; six grandchildren; four great-grandchildren; one sister: Jackie Cherry of Mt. Juliet, TN; one brother: Greg Knott (Jeannie) of Lawrenceburg, TN; several beloved nieces and nephews.
Graveside services and inurnment for Kenneth Knott were conducted at Mimosa Cemetery at 2:00 p.m. on Friday, April 29, 2022 with Jeff Jacob officiating. Neal Funeral Home was in charge of all arrangements. Condolences may be sent by way of: www.nealfuneralhome.net. ~ “Love your neighbor as yourself.” Mark 12:31.