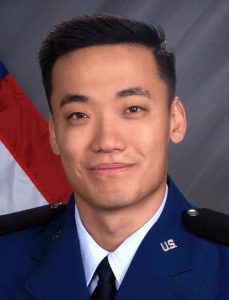 Christopher “Ryong” Adams
Christopher “Ryong” Adams, age 23, of Clarksville, TN passed away Tuesday, May 3, 2022 in Colorado Springs, CO.
He was born in Daegu, South Korea and was a graduate of Rossview High School in Clarksville, TN. He joined the United States Air Force as a Loadmaster in a Special Operations Unit and was an E4 when he applied and was accepted into the United States Air Force Academy in Colorado Springs. He graduated from the USAFA Preparatory School in 2021 and was currently finishing his freshman year as a Cadet Fourth Class.
Our family mourns the loss of our precious 23 year old always smiling son who was a bright and shining star to all who knew him.
He was preceded in death by his maternal grandfather: Richard E. Humston; paternal grandfather: Phil Adams; and paternal grandmother: Sharron Lee Conklin.
He is survived by his mother and step-father: Sandi Spicer (Rich) of Nashville, TN; his father and step-mother:  Phil Adams (Leah) of Clarksville, TN; two brothers: Conner Adams (Callie) of Orlando, FL, and 2nd Lt Colsen Adams of Vilsek, Germany; two step-sisters: Carly Spicer and Macy Spicer, both of Hendersonville, TN; three step-brothers: Ben Spicer of NY, Dawson Demott, and Tristan Fetter, both of Clarksville, TN; maternal grandmother: Winona Humston of Lawrenceburg, TN; step-grandparents: Joe Spencer (Annette) of Clarksville, TN; and many aunts, uncles, and cousins.
Funeral services for Christopher “Ryong” Adams were conducted at First United Methodist Church in Hendersonville at 11:00 a.m. on Saturday, May 14, 2022 with Don Hutchinson officiating. Interment followed at Loretto Cemetery in Loretto, TN at 3:30 p.m. will full military honors. Neal Funeral Home was in charge of all arrangements. Condolences may be offered by way of: www.nealfuneralhome.net.