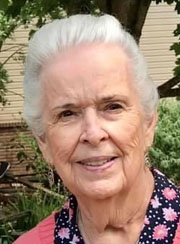 Leona “June” Word Pope
Leona “June” Word Pope was born June 21, 1936 to John H. and Patty Frances Foster Word in Pharr, TX. She passed away Friday, May 13, 2022 in Lawrenceburg, TN.
Shewas raised in the Rio Grande Valley of Texas and, later, in Cheek, Oklahoma. She graduated from Lone Grove High School in 1954. In 1956, she married Robert “Paul” Pope in Oklahoma City. They soon settled in Pauls Valley, Oklahoma, where they spent most of their married life. She was baptized into Christ as a teenager and was faithful throughout her life. At the time of her passing, she was a member of the Springer Road Church of Christ in Lawrenceburg. June and Paul raised their family and served their church in Oklahoma for almost 50 years before relocating to Tennessee.
June was an accomplished seamstress and sewed for the public for many years. She also worked in a drapery shop for a number of years where she made and installed custom draperies. However, her most important occupation was as a Christian, wife and mother. She was known for her hospitality, for visiting and tending to the sick and elderly and for sending cards to people far and wide. She sent hundreds of cards over the years to cheer and encourage. She was also known for her wisdom, perseverance and love of God’s word. She read the bible through multiple times during her life.
`She was preceded in death by her parents; ten brothers and sisters; and cherished daughter: Laurie Sue Pope O’Dell.
She is survived by Paul, her devoted husband of 65 years; daughter: Allison Harris of Franklin; beloved “granddog”: Maude and treasured church family. She is also survived by daughter: Dana Cutter of Oklahoma City; three grandchildren; three great-grandchildren; and other extended family.
Funeral services for Leona “June” Word Pope were conducted at Neal Funeral Home at 1:00 p.m. on Tuesday, May 17, 2022 with James Smith officiating. Interment followed at Chapel Grove Cemetery in Lawrence County, TN. Neal Funeral Home was in charge of all arrangements. Condolences may be offered by way of: www.nealfuneralhome.net.
The family wishes to gratefully acknowledge the care and compassion offered by Southern Tennessee Regional Health System – Lawrenceburg, NHC Scott Healthcare Center and Unity Hospice.