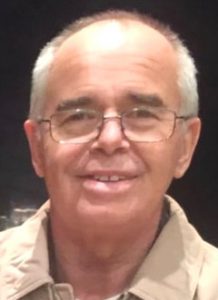 John Alexander Dryden
On May 16, 2022 John Alexander Dryden, age 71, of Leoma, TN, passed peacefully, surrounded by his family.
John was born on February 12, 1951, in Lawrenceburg, TN, to the late Lovie Tennessee Stewart Dryden and the late Thomas Alexander Dryden. He was one of six children raised on a quiet farm in Leoma, TN, where he helped tend to the animals and crops, while also spending many days riding horses and playing at the creek along with his brothers and sisters. After graduating from Loretto High School in 1969, he joined the National Guard, where he spent six years in service to his country. Afterwards, he took a job at Murray-Ohio Manufacturing in Lawrenceburg, TN, working as a machinist until the plant shut down in 2005. John spent the last fifteen years as a machinist for Whitman Publishing in Florence, Alabama. He was loved by the many who felt blessed to call him “friend” while working alongside him.
On August 19, 1977, he became a father to Heather Dryden Belew. On December 13, 1979, his second daughter, Holley Jane Dryden, was born. On November 27, 1983, he welcomed into the world his third daughter, Hope Layne Coffman.
In June of 1998, he married the love of his life, his late wife, Marian Denise Dryden (Fleming), mother of Brett Allen McDavid and Laura Elizabeth Galloway (McDavid). John and Marian spent twenty-two years raising their children, serving God and making many cherished memories, until her passing in May of 2020.
John was known for his calm nature and the positive attitude he carried no matter what life put in his path. He was content in every circumstance and brought joy to all of those around him. He enjoyed what many would consider the small things about life: sitting on the porch to watch the sun setting over the pasture, riding up “North” to visit the Amish community during warmer months for tomatoes and strawberries he shared with his family, and “making the loop” to see what all his brothers and sisters were up to. One of his greatest joys was being “Papa John” to his grandchildren, and he loved them all deeply, a love that was easily returned.
He was a member of the Leoma Church of Christ, where he attended his entire life. He was a faithful servant and was prepared to meet his Savior.
John was preceded in death by his parents: Lovie Tennessee Stewart Dryden and Thomas Alexander Dryden; brother-in-law: Larry Killen; and his wife: Marian Fleming Dryden.
He is survived by his five children: Heather Belew (Sean), Holley Dryden, Hope Coffman (Michael), Brett McDavid, and Laura Galloway (Drew); grandchildren: Ryleigh Belew, Blakeley Sills, John Pierce Sills, Haylee Coffman, Colton Coffman, Kendall Galloway, Bennett Galloway, and one baby boy (McDavid) on the way; siblings: Jimmy Dryden (Freda), June Killen, Jane Dickson (David), Jerry Dryden (Linda), and Joel Dryden (Teresa), and many beloved nieces, nephews, great-nieces, great-nephews and friends.
Funeral services for John Alexander Dryden were conducted at Leoma Church of Christ at 1:00 p.m. on Friday, May 20, 2022 with David Killen, Joel Dryden, and Jerry Dryden officiating. Interment followed at Lawrence County Memorial Gardens in Lawrenceburg, TN.  The family suggests memorials be made to the Memorial Scholarship Foundation or Honduras Missions. Neal Funeral Home was in charge of all arrangements. Condolences may be offered by way of: www.nealfuneralhome.net.