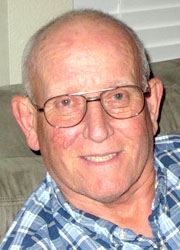 Robert Norman McCormick
Robert Norman McCormick, of Summertown, TN passed away in Howenwald, TN on Wednesday, May 25, 2022 at the age of 70.
Robert was born and raised in Oxford, MI and stayed in that area until meeting the love of his life, Sandy Butler, and moving to Summertown, TN in 1994. He was jack of all trades and there was nothing he couldn’t do. He enjoyed time with his family, travel, and made a living selling goods at truck and tractor shows throughout the mid-west. He could talk to anyone about anything and was wise well beyond his education.
He is survived by his wife: Sandy Butler McCormick; children: Carolyn (Timothy) Nickel, Aaron (Candy) McCormick, Rosemary (Charles) Williams, Christine (Randy) Jackson, Robert (Shelley) Butler; and eight siblings. He was the proud grandpa of fourteen grandchildren; and ten great-grandchildren.
A memorial service for Robert Norman McCormick was held at 12:00 p.m. on Saturday, May 28, 2022 at Panoramic Full Gospel Church, 410 State Highway 20 in Summertown TN.