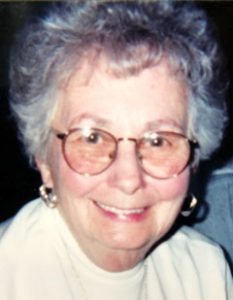 Thelma Jane Royse Compton
Thelma Jane Royse Compton, age 92, of Lawrenceburg, TN passed away on Friday, June 3, 2022 at NHC Lawrenceburg, with her family and faithful caregivers at her bedside.
Thelma was born September 3, 1929 in Lawrenceburg, TN, the daughter of Belford Royse and Jennie French Royse. She was raised in the New Prospect community of Lawrence County. She graduated from Lawrence County High School in 1947, and lettered as a guard for the Lady Cats Basketball team. The month after graduation, she eloped to marry Thomas Compton of Lawrenceburg, to whom she remained a devoted wife of 56 years. Thelma continued her love of basketball after marriage while employed at Salant and Salant Mfg. and played into her 20’s as a key guard on their Industrial Women’s League team competing against other industrial teams in the region.
Thelma retired from Kay Windsor Mfg, as a top- pressor, after 25 years of service. She lived out her faith in Christ daily and until physically unable, was an active member of the New Prospect United Methodist Church. She was also past president of the VFW Women’s Auxiliary post WWII.  She loved warm weather and spent her free time doing anything that involved being outside. She loved watching baseball, riding her bicycle, gardening, mowing, fishing, and especially camping. With her husband, she was a member of the Good Sam’s Camping Club of Lawrenceburg for many years. She and her husband Tom spent each winter, after retirement, traveling in their RV to Bradenton, FL to camp at a retirement community there. When she could not venture outside, she would quilt and has made many beautiful keepsakes for her family.
Thelma was never an idle person and serving her family and others was her love language.  After her stroke and even when challenged by extreme difficulties, she always found a way to be involved in resident activities of every kind, especially those involving Biblical trivia or music.  Instrumental hymns and Swing music of the 40’s were her favorites. When her body became unable to be active, she could be found tapping her toes or fingers with a smile to the beat of any music.
She was a devoted wife, mother, grandmother, great-grandmother, and loyal friend.  She will be remembered for her strength and unequaled endurance by all who knew her. She ran the difficult race of the last 17 years of her life with incredible determination and perseverance each day, sprinkled with words of humor, wit, and kindness in the midst of such great difficulties, and has now received her reward of rest. She will be greatly missed by all who cared for her and loved her.
Thelma was preceded in death by her parents: Belford Royse and Jennie French Royse; her husband: Thomas F. Compton; her son: Thomas Keith Compton; her brother: Ralph French; and sisters-in-law: Juanita Ezell French and Bonnie Compton Arnold.
She is survived by one daughter: Karen Compton Lanning (Rick) of Lawrenceburg, TN; daughter-in-law: Donna Bierwirth of Pulaski, TN; six grandchildren: Krystal Compton of Nashville, TN, Jada Bierwirth Silva of Norfolk, VA, Tyler Lanning (Myranda) of Lawrenceburg, TN, Eric Lanning (Maci) of Leoma, TN, Alexa Lanning of Baltimore, MD, and Anna Lanning of Nashville, TN; two great-grandchildren: Willow and Reed Lanning of Leoma, TN; three nieces: Brenda Arnold Long of Detroit, MI, Janice French Bowers of CO., and Martha French Fletcher of Kennesaw, GA.
A private graveside service and internment for Thelma Jane Royse Compton was held at Lawrence County Memorial Gardens on Tuesday, June 7, 2022 with Rev. Billy Beal officiating, accompanied by violinist Jay Hirsch. Neal Funeral Home was in charge of all arrangements. The family suggests memorials be made to St. Jude Children’s Research Hospital.