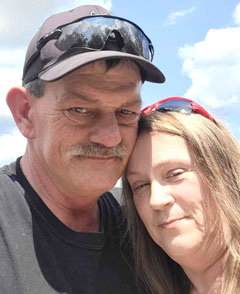 Loyd Springer, Jr. (“Junior”)
Loyd Springer, Jr. (“Junior”), age 50, passed away on Tuesday, August 2, 2022 at St. Thomas Hospital in Nashville, TN.
He was a diehard Alabama fan and loved fishing, hunting, and last, but not least, Pokémon. He loved his fiancé and both of their entire families.
He was preceded in death by his mother; father; and his precious little girl.
He is survived by his fiancé: Jennifer Davis; and three sons: Wesley Davis (Sherry), Chase Davis (Kaylin), and Matthew Davis (Rylee), all of Lawrenceburg, TN; his sister: Vicky Seymore (Wade); nieces: Amelia and Ashley; four great-nieces; eight grandchildren: Rosalie, Emma Leigh, Tannalee, Addysin, Dakota, Vanessa, Henry and McKenna, all of Lawrenceburg, TN; and a very special cousin who was like his sister: Paula Dollar.
A Celebration of Life for Loyd Springer, Jr. (“Junior”), will be held at a later date (to be posted) for all of his friends and family. We at Kelley Insurance loved you and you will forever be missed.