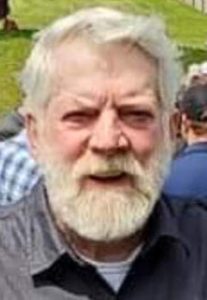 Edward “Ed” Lee Steele
Edward “Ed” Lee Steele, passed away Friday, September 2, 2022 in Lawrenceburg, TN.
Ed was born near Boscobel, WI on May 31, 1946 to Kathryn (Welch) Steele and Ernest Steele. He joined the Army in 1963 and was part of the 82nd Airborne Division and became a Paratrooper. He loved to tell the story of his first time in an airplane, which also became his first time jumping out of that plane. He moved around the United States, working as a Union painter for many years before settling in Lawrenceburg, TN, where he remained the past 30 years.
Ed loved to deer hunt with his family and be out in nature. He enjoyed helping his brothers, neighbors and friends with projects. His time as a paratrooper allowed him to ease into working at great heights. He always felt it took him closer to God. Ed had been given an opportunity to paint the launch pad for NASA in Cape Canaveral and worked on Epcot Center in Orlando, FL when it was first constructed. When Ed worked in Tennessee, he took pride in the painting and repair of Historic buildings and church steeples. He took his time and made sure no detail was ever missed.
He took great joy in watching his children and grandchildren grow. His Tennessee home displayed this joy and love with pictures of them throughout. He loved to share stories about his grandchildren; they were always told with great pride.
He was preceeded in death by his parents; his brothers: Robert, John, Thomas, Larry, Donald and Gerald; sisters: Kathryn, Delores (Steele) Chamberlain, Joan Steele; and his daughter: Shann Copus.
He is survived by his sons: Jason (Niki) Steele of Viroqua, WI, Shay (Elizabeth) Larson of Lone Rock, WI and, Adam Steele of Summertown, TN; his grandchildren; his sister: Janet (Steele) Lund of Wauzeka; and his many nieces and nephews.
In lieu of a funeral service, the family of Edward “Ed” Lee Steele has chosen to host a celebration of life in Wisconsin at a later date.