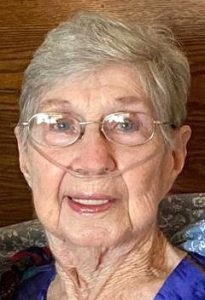 Doris June Allen Guthrie
Doris June Allen Guthrieage 90, passed away on September 27, 2022, at Country Cottage in Lawrenceburg, Tennessee 38464.
Born on February 1, 1932, in Lauderdale County, AL, she lived most of her early years between there, Lawrenceburg, TN, and Tucson, AZ. She married William Seaburn Guthrie from Summertown, TN on September 5, 1954 and accompanied him through a twenty-year period of service in the United States Air Force. Together, they completed tours here in Tennessee, Michigan, Texas, Louisiana, South Carolina, Germany, Italy, and France, to name a few. Mrs. Guthrie took advantage of available jobs at each base they lived. She was an advocate for military spouses long before there were organized support groups. Of the overseas assignments, she described a certain element of panic, but then actually grew to love each one. Upon retirement from the military, they built a home on the river in Rogersville, AL where they became a TVA family for seventeen years before his second retirement.
They spent many winters in Florida where she loved their friends and neighbors and tolerated his fishing hobby. They loved to travel and took advantage of the many available tours for seniors.  When he no longer chose to travel, she traveled with friends she had met along the way. Much of her recent conversations about the past centered on their joys of travel and the good times with friends and family.
In 2016, Mr. and Mrs. Guthrie created the Guthrie Scholarship Fund under the Lawrence County Education Foundation which provides post-secondary scholarships to students graduating from Summertown High School, Mr. Guthrie’s alma mater. Since then, The Guthrie Foundation has provided support for many students to-date and will continue to help numerous young men and women meet their career goals.
Preceding her in death were her parents: Bluford Almon Allen and Eunice Shelton Allen; brother: Robert Allen; sisters: Carrol Ann (Dusty) Oliver, and Brenda Michelle Allen.
Survivors include her husband: William S. Guthrie currently of Lawrenceburg, TN; brother: Dale Allen (Connie) of Hayesville NC; sisters-in-law: Chu Allen of Granite Bay, CA and Pearl Cotton of Lawrenceburg, TN.
Per request of the couple, a private family burial will be scheduled at a later time. Neal Funeral home is overseeing all arrangements. Memorials may be sent to: The Guthrie Scholarship Fund,
% The Lawrence County Education Foundation
P.O. Box 961, Lawrenceburg, TN 38464.