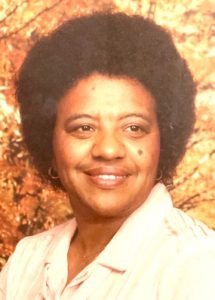 She was born in Lynnville, TN on September 24, 1934. She was a member of St. John United Methodist Church, in Lawrenceburg, TN. Bernice was a graduate of Bridgeforth High School, in Pulaski, TN. She went on to earn her Bachelor’s Degree in Education from Tennessee State University in Nashville. She began her working career with the TSU Health Education Department and she would go on to retire from the Internal Revenue Service where she started her work as a Field Officer and worked her way to Supervisor. She was a founding member of the Whizzette Social club, and a member of the NAACP and National Federation of Business and Professional Women’s Club. Bernice served in a variety of volunteer capacities from Junior Achievement and youth organizations that prepared children for their careers, to battered women’s shelters. After retiring, she worked at This End Up Furniture Store and was the Executive Assistant for the Black Coaches Association. She was an avid donor to the American Red Cross and an extremely charitable person with a heart of gold.

Visitation for Bernice Braden Carter will be held at St. John United Methodist Church on Saturday, October 8, 2022 from 11:00 a.m.to 12:00 p.m. with the funeral service to follow at 12:00 p.m. Please feel free to wear any bright or traditional color that you choose, Bernice was fond of color. Interment will be held at Lawrence County Memorial Garden.