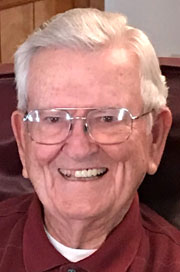 Carl Donald Alexander, Sr.
Carl Donald Alexander, Sr., age 95, of Lawrenceburg, TN passed away Monday, October 17, 2022 at NHC Place at The Trace in Nashville, TN.
He was a native of Clayton, NM, retired Employee Benefits Manager from Murray Ohio, and a member of First Street Church of Christ. Mr. Alexander served his country honorably in the U.S. Navy.
He was preceded in death by his parents: Elmer Joshua and Opal Chilcote Alexander.
He is survived by his wife: Betty Boston Alexander of Lawrenceburg, TN; two sons: Don Alexander (Kaneal) of McMinnville, TN, and Jack Alexander of Franklin, TN; one daughter: Jan Meek (Steve) of Franklin, TN; five grandchildren; and eight great-grandchildren.
Funeral services for Carl Donald Alexander, Sr., were conducted at Neal Funeral Home at 1:00 p.m. on Thursday, October 20, 2022.  Interment followed at Lawrence County Memorial Gardens in Lawrenceburg, TN with full military honors. Neal Funeral Home was in charge of all arrangements. The family requests memorials be made to the Alzheimer’s Association or the charity of your choice. Condolences may be offered by way of: www.nealfuneralhome.net.