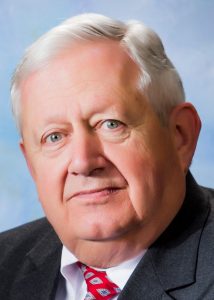 James G. “Jim” White
James G. “Jim” White, II, age 77, passed away on Tuesday, November 1, 2022.
Tennessee educated, Jim began his lifelong love of knowledge at Lawrence County Schools before attending Tennessee Technological University and receiving his Juris Doctor degree at the University of Tennessee. Outside of the traditional classroom, Jim learned invaluable lessons through his involvement with the Boy Scouts, achieving the rank of Eagle Scout. He was also recipient of the Long Rifle Award, the Silver Beaver Award, and was a James E. West Fellow. Later, he gave back to the organization and its youth by serving as vice-president of the Middle Tennessee Council of Boy Scouts and an active fundraiser.
A man with faith and values from a bygone era, Jim’s life was dedicated to protection and service to others. He was a life-long member of the First United Methodist Church where he was a Trustee for many years.  He was also well known for his community involvement and volunteerism – an over forty-year member of both the Kiwanis Club and the Lawrence County Chamber of Commerce where he also served as treasurer. Most recently, Jim served as treasurer of the Lawrence County Higher Education Foundation. Beyond his time and treasure, Jim gave of himself as a pre-eminent blood donor through the American Red Cross.
Jim’s approach to putting others first also permeated his professional pursuits.  He was a retired Captain in the United States Navy and served in Vietnam. During his naval career, he commanded seven naval reserve units in Alabama and Louisiana. Jim also gave nearly thirty years to public service as Assistant District Attorney General. He was a member of the Tennessee Bar Association and past president of the Lawrence County Bar Association.
Jim was an avid reader, a good friend to those who knew him and a wonderful grandfather.
He was preceded in death by his parents, Jim and Letha Harlan White; and his brother, Joe White.
He was survived by his wife, Mary Smithson White; and his children, Paisley (Michael) Crane, Allison (John) Baker, Molly (Rich) Call, and Brice Reed.  Surviving grandchildren are Will Crane, Sam Crane, Meghan Baker, Meredith Baker, Mary Carlton Call, and Jada Reed.
A Celebration of Life for James G. “Jim” White was conducted at First United Methodist Church at 2:00 p.m. on Sunday, November 6, 2022. In lieu of flowers, the family asks to honor Jim’s commitment to youth through making contributions to Middle Tennessee Council of Boy Scouts, 3414 Hillsboro Pike, Nashville, TN 37215 or the Children’s Ministry at First United Methodist Church, 212 Waterloo Street, Lawrenceburg, TN 38464. Neal Funeral Home was in charge of all arrangements. Condolences may be offered by way of: www.nealfuneralhome.net.