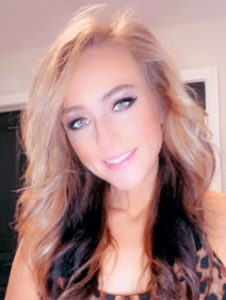 Hunter LeAnn Smith
Hunter LeAnn Smith, age 29, of Leoma, TN passed away Wednesday, November 30, 2022 at Southern TN Regional Health System in Lawrenceburg, TN.
She was a native of Lawrenceburg, TN and a member of Antioch United Methodist Church. She was a multi-faceted individual who excelled in everything she did. She was a Licensed Insurance Producer, a certified microblader, a devoted pet caregiver, and a self-employed travel agent. She was deeply loved by everyone in her life and was an inspiration to many. She lived a life of creativity and beauty, which was evident in her passion for cosmetology and all things artistic.
She was preceded in death by her grandfathers: Lacy Joe Marston and Carl Smith; her grandmother: Annie Lou Smith; fiancé: Michael Ray Sanders; and special uncle: Gary “Bubba” Marston.
She is survived by her mother: Pam Smith of Leoma, TN; father: Tim Smith of Lawrenceburg, TN; two sisters: Brandi Reed (Anthony) and Laci Smith (Jeff Marks), both of Collinwood, TN; grandmother: Marylin Marston of Leoma, TN; aunt: Shari Godley (Jon) of Brentwood, TN; four nephews: Austin Reed, Gunner Yocum,  Aiden Marks, and Noah Marks; three nieces: Lakelyn Martin (Hunter), Jayden Reed, and Emma Marks; GBaby: Haven Ellis; special friend: Chetta Reinke; and most of all her special fur babies: Keeko and Bodhi.
Funeral services for Hunter LeAnn Smith were conducted at Neal Funeral Home at 3:00 p.m. on Monday, December 5, 2022 with Rodney Livingston officiating.  The family suggests memorials be made to St. Jude Children’s Research Hospital or The Foundry. Neal Funeral Home was in charge of all arrangements. Condolences may be offered by way of: www.nealfuneralhome.net.