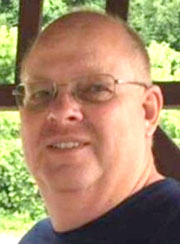 Dennis Lee Raines
Dennis Lee Raines, age 56, of Lawrenceburg, TN passed away Monday, December 5, 2022 at his residence.
He was a native of Detroit, MI, a graduate of LCHS, and employed with DRM. He was a member of West End Fire & Rescue where he served as the former fire chief for 15-plus years. He was of the Baptist faith.
He was preceded in death by his father: Roy Allen Raines; and one brother: Roy Allen Raines, Jr.
He is survived by his wife: Paula Raines of Lawrenceburg, TN; two step-children: Matthew Brown and Brandie Brown-Rhodes, both of Lawrenceburg, TN; his mother: Betty Faye Chapman Raines of Westpoint, TN; three sisters: Pam Matthews of Columbia, TN, Linda Baugus of Lawrenceburg, TN, and Tracey Luna (Mike) of Lawrenceburg, TN; five grandchildren: Riley Brown, Troy Brown, Gabriel Brown-Rhodes, Zoey Brown-Rhodes, and Kassidy Johnston; several nieces, nephews, great-nieces, and great-nephews.
Graveside services and interment for Dennis Lee Raines were conducted at Unity Cemetery at 1:00 p.m. on Friday, December 9, 2022 with Ricky Cotton officiating. Neal Funeral Home was in charge of all arrangements. The family suggests memorials be made to West End Fire & Rescue. Condolences may be sent by way of: www.nealfuneralhome.net.