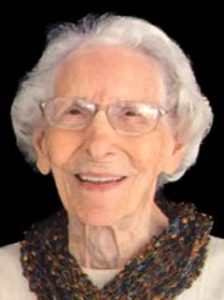 Frances Howard Norton
Frances Howard Norton lived a life filled with the love of family, many friends, and the joy of enticing those around her with a newly discovered book. She died peacefully with her family on Monday, December 5, 2022, having recently shared the celebration of her 104th birthday via zoom with her extended family from across the country.
Frances was born in 1918 and raised in Black Creek, North Carolina along with her three siblings. Her father, Fred Howard, Sr. and mother, Annie Whittaker Howard, loved North Carolina and visited the beach and the mountains frequently during her childhood, where many of the extended family remain.
Early on Frances knew she wanted to be a librarian and along with her brothers and sister, attended the University of North Carolina at Chapel Hill. Frances graduated from UNC in 1938 at age 19 with a BA in Library Science. She continued studies at UNC to receive a Master of Library Science. She began her career with the New York Public Library. She returned south to work as a librarian for the Tennessee Valley Authority during the construction of Watts Bar Dam. There she met her future husband James Arthur Norton. Following the War, they settled in Lawrenceburg TN, the childhood home of her husband. Here they raised two children: Anna Norton Dittmann of Las Vegas, NV and John Norton of Moscow, Idaho. She worked as a librarian at Lawrence County High School and nearby Summertown High School. Frances was instrumental in reestablishing an elementary school library at what was then The Old Public School, selecting the books and organizing a staff of volunteer parents to run that library. She was a driving force for the construction of a new Lawrence County Public Library and coordinated the construction details and landscaping for the funding donors.
To be closer to family in retirement, Frances and Jim left the South for Moscow, Idaho in 1991 and settled into a home at Good Samaritan Village, finding it a perfect new home for their needs. As she had when moving to Lawrenceburg, TN after the War, she easily cultivated a new circle of friends in Moscow. Frances’s gracious charm, intellectual curiosity and sincere warmth endeared her to so many. The family wishes to thank those many kind and generous people, now friends, who welcomed and embraced her throughout the next 31 years. This includes her Unitarian church friends, book club members, the friends of John and Ann Norton, and the many residents and staff at Good Samaritan Village, all of whom were part of her new village. She lived independently and in good health past her 100th birthday, an inspiration to all. In the last 3 years, she left her home behind for Good Sam’s assisted living and nursing care. The family particularly wishes to thank the staff of Good Samaritan Village for their skilled care and kindness to Frances in that time.
Frances leaves her daughter: Anna Black Norton Dittmann (George) of Las Vegas, NV; son: John Howard Norton (Ann) of Moscow ID; four grandchildren and their spouses: Katherine Frances Harvey (Chris) with great-grandson Emmett Harvey of Reno, NV; James Arthur Dittmann of Las Vegas, NV; Nicholas Andrew Norton (Nicole Campbell) and great-grandson Emil Howard Norton of Olympia, WA; and Diane Marie Norton of Moab, UT.
Frances will be interred in Lawrenceburg, Tennessee alongside her husband. A memorial service in Moscow, ID will be held at a later date. Donations in Frances name may be made to the Lawrence County Library.