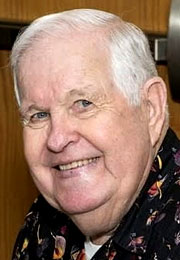 Robert “Paul” Pope
Robert “Paul” Pope was born January 17, 1933 to the late James Isaac Pope and Beatrice Melton Pope in Wetumka, OK and passed away December 15, 2022 in Lawrenceburg, TN.
Paul was raised in Oklahoma City and graduated in 1951 from Crooked Oak High School where he played football and was known for playing pranks. He joined the United States Army in 1953 and served in the Korean War, being honorably discharged in 1955. Paul married Leona “June” Word in 1956 in Oklahoma City. They soon settled in Pauls Valley, OK, where they spent most of their married life. Paul was led to Christ by June and was baptized in 1956. He was faithful throughout his life and, at the time of his passing, was a member of the Springer Road Church of Christ in Lawrenceburg, TN. Paul and June raised their family and served their church in Oklahoma for almost 50 years before relocating to Tennessee.
Paul worked in a variety of skilled labor jobs including carpentry, welding and machine work. He spent most of his career with Sun Oil Company and retired from there in 1993. After his retirement, he continued to work for the public in and around Pauls Valley. If you asked Paul what he enjoyed doing, even in his later years, he would say, “I like to work.”
He enjoyed hunting, fishing, trapping, beekeeping and other outdoor activities. He loved playing games and spent many happy hours playing dominoes, Rook, Yahtzee and other games with family and friends. He was also a lifelong Oklahoma Sooners fan and enjoyed talking about the Sooners to anyone who would listen.
Paul was known for his work ethic, honesty, fairness, and sense of humor. He loved to cut up, joke and tease the people he loved, a trait he maintained until the very end of his life. He was also known by his Christian example which was felt by all who knew him. He was devoted to taking his family to church, leading in worship, showing hospitality and serving in any capacity needed.
In addition to his parents, Paul was preceded in death by June, his wife of 65 years; six siblings; and daughter: Laurie Sue Pope O’Dell, whose memory he treasured for almost 30 years.
He is survived by daughter: Allison Harris of Franklin; beloved “granddog”: Maude; devoted church family; and lifelong best friend: Gary Jarman. He is also survived by daughter: Dana Cutter of Oklahoma City; three grandchildren; three great grandchildren; and other extended family.
Funeral services for Robert “Paul” Pope were conducted at Neal Funeral Home at 1:00 p.m. on Monday, December 19, 2022 with James Smith officiating. Interment followed at Chapel Grove Cemetery in Lawrence County, TN. Neal Funeral Home was in charge of all arrangements. Condolences may be offered by way of: www.nealfuneralhome.net. The family wishes to express sincere appreciation to NHC Scott Healthcare Center and Compassus Hospice.