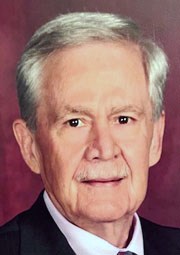 Mackie Hovater
Mackie Hovater, age 74, of Lawrenceburg, TN was called home on Friday, December 22, 2022 after a courageous battle with cancer.
Maxwell “Mackie” Ray Hovater was born on October 13, 1948 in Tuscumbia, AL to Raymond and Earline (Mills) Hovater. He graduated from Deshler High School and studied at the University of North Alabama. He worked as a boilermaker before starting his career with General Motors and eventually retired from the Saturn plant in Spring Hill, TN. Mackie served as a treasurer, PowerPoint builder, Sunday School teacher, jolly elders breakfast maker, and everyone’s quick-witted yet quiet go-to man. He delighted in serving God in every way possible and was a devoted member of Summertown Baptist Church. He was proudly committed to his family, church community, and Alabama football.
He is preceded in death by his father: Raymond Hovater, and his brother: Tim Hovater.
He is survived by his wife of 33 years: Susan (Newton) Hovater; daughter: Melissa Hovater (David); mother: Earline Hovater; sister: Pat Thompson; nieces: Kim Reid (David) and Amy Patterson (Chris); great-niece: Madelyn Patterson; his buddy: Matthew Griffin; and, many extended family and friends.
Funeral services for Mackie Hovater were conducted at Neal Funeral Home at 1:00 p.m. on Tuesday, December 27, 2022 with Howard Kitter officiating. Graveside service and interment followed at 3:00 p.m. at Oakwood Cemetery in Tuscumbia, AL. Neal Funeral Home was in charge of all arrangements. Condolences may be offered by way of: www.nealfuneralhome.net.
The family wishes to thank the many friends and neighbors for their loving care and friendship as well as the doctors, nurses, and staff at Maury Regional Medical Center for their skilled and compassionate attention.